Below Richard gives us a ‘brief’ history of St.Leonard. If you’d like to find out more about the church and its history, please visit his blog.

Those interested in St Leonard’s church may be surprised to know that this was not the first church in Horsham to bear the name of St Leonard. There was, before the Reformation, a chapel in St Leonard’s Forest, built on the site of a cell where a hermit named St. Leonard had dwelt, of which some information is given in Cartwright’s History of Sussex. Cartwright states:

The earliest notice that has been met with (of this chapel) is in the Taxation of Bishop Langton in 1320, when it is excused payment on account of its poverty. In 1400 W. Ashendon was presented to the chapel of St Leonards-juxta-Horsham, by the king, during the minority of Lord Mowbray. In the Augmentation Office this chapel is only noted twice. “The free chapel of St Leonard, near Horsham, no incumbent, for the priest did give up the same to my Lord of Norff.’, a lytil time before his attaynder.” ‘Capella S’ct Leonardi per annum, claire valet, ix

However, recent evidence has come to light showing that the chapel existed in 1215, and if as seems likely, it gave its name to the forest rather than vice-versa, had been founded by c.1208. It survived until the mid-16th century, when it was dissolved shortly before 1547 by the Duke of Norfolk. It was not a chapel-of-ease, for the incumbent of Beeding apparently had no jurisdiction over it; instead, it was described as a free-chapel or chantry belonging to the successive lords of St Leonard’s Forest, the Braoses, the Mowbrays, and the Howards, who presented its chaplains. At the Crawley Exhibition, in 1865, a venerable old key was shown, said to have belonged to the chapel in the forest.

No trace has survived of the building. The site is supposed to have been in an enclosure of about one acre, some two miles outside Horsham, sited either on what became the bay of Hawkin’s pond, or not far from the parish boundary near the Horsham-Colgate road leading to Pease Pottage. Horsham abounds with references to St Leonard, his name being given to the Church, road, forest, and pub. But who was he?

The usual works of reference tell us that he was a hermit of the 9th century, but little that can be relied upon is known of him. A life, c.1025, of his is, we are told, quite unhistorical. Despite these disadvantages, St Leonard became one of the most popular saints in the later Middle Ages. His feast day is celebrated on 6 November. Nothing absolutely certain is known of his history. According to his extraordinary legend, Leonard belonged to a Royal Anglo-Saxon family of the time of King Canute. There is the well-known story of his having slain a dragon in St Leonard’s Forest after a bloody battle, and of lillies of the valley having grown up wherever the Saint’s blood fell on the ground, and there are other stories about him too. However, although there are still lillies in the forest, these stories are due entirely to local legend. The tradition that there was formerly a dragon in this forest is most likely attributed to a book published in 1614 by John Trundle, which related that:

A straynge and monstrous serpent lately discovered and yet living, to the great annoyance and divers slaughters both of men and cattell, by his strong and violent poison”  and in which the creature is described: “This monster was above 9 feet long, shaped lyke an axel tree, with bunches at his side like footballs, which they feared might turn to wynges; he castes his venom 4 rods, and his principal foode is the rabbits of a neighbouring warrenne. 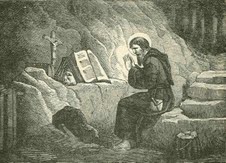 St Leonard at his devotions

St Leonard’s Forest belonged to the great family of De Braose and the Dukes of Norfolk, who succeeded them, but, upon reverting to the Crown, had for more than 200 years been held by several owners. The principal avenue was called Mike Mill’s Race, who, for a wager, undertook a race against the Devil, and fell dead there in the moment of victory. However, the most picturesque legend which lingers around the forest is one postulated by Dr Andrew Borde, who wrote in the 16th Century, saying of the nightingale, “The bird wyl syng round about the forest, but never within the precinct of the forest’. This is because they once disturbed the devotions of St Leonard, who cursed them.

Many years ago a biography of “St Leonard of Sussex” by A C Crookshank, was published by Arthur H Stockwell of Ludgate Hill. According to this account our saint was born in 1046 at Chidham in Sussex to Cobnor, a son of King Canute, and a British woman named Una, although Leonard was kept in ignorance of his ancestry for the first ten years of his life and for a time lived as a swine-herd in the forest. Cobnor’s mother was a Saxon wife of Canute, Aelgifu, sister of Werna, priest of Worth. (Later, the king was persuaded to marry Emma, widow of King Aethelred.) It was Werna who told Leonard the secret of his ancestry, for St Leonard’s parents had both died during his infancy and Cobnor had committed him into the care of Werna. It was Leonard, we read, who was responsible for rebuilding in stone the then wooden church at Worth. He discovered an old Roman quarry near Worth which provided the stone, and the building work was financed by the sale of St Leonard’s lands in Chidham.

What is undeniable, is the fact that Worth at the time of Domesday was hardly a village, a few houses only, yet the imposing church there (St Nicholas) was erected in a different style to other Sussex churches. The DB entry reads: “There is a villain with half a plough. In the time of King Edward it was worth 30 shillings, and afterwards 2 shillings, now (in 1086) 20 shillings.” The question arises, and there is no answer, why was so fine and large a church built in so small and unimportant place? Hardly to meet the needs of one villain and his family. Worth was part of the king’s Demesne lands, an outlier of the manor of Cherchefelle, and here we do have the suggestion of a direct link between Leonard and his grandfather King Canute, whom Edward the Confessor had succeeded.

There is much else in this delightful romance which cannot be recounted here. It is to be feared that the hagiography of the story is somewhat below that of the life alluded to at the start of this note. The compiler of the Oxford Dictionary of Saints concluded his article on Leonard with the words “Leonard’s historical existence is probable, but unproven.” Perhaps some enterprising publisher will one day reprint the story by A C Crookshank, for true or not, it is a good tale, well told, and

is not the wish, the father to the thought?

As a postscript it may be added that at Warninglid there is a place-sign which depicts a very un-priestlike Viking warrior with a spear below which appear the words “Werna Gelad”, obviously an attempt to explain the etymology of Warninglid, Werna or Wearda being the name of the warrior (a hypocoristic form of Weardbeorht) and Gelad meaning path.  Whether this is explanation any more reliable than the story of the priest at Worth is open to speculation.

Visual Verse of the Day